As we all know, Spain is full of gorgeous, relaxing beaches, fine dining, exciting nightlife, good shopping and more. This is what makes Spain one of the worlds most popular holiday destinations. But where should you visit in Spain? There’s such a diverse variety of places to choose from, all unique in their own way. Here’s the 8 places you must visit in Spain: 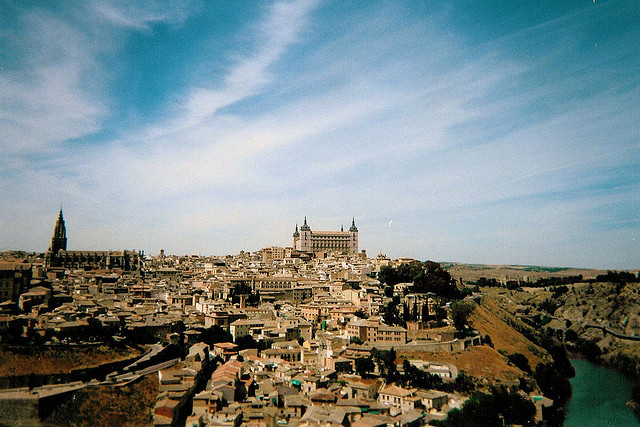 Tourists have recently discovered Bilbao since Guggenheim Museum was born in 1990. Since then, the economy has grown, and many hidden treasures of Bilbao have been discovered. Definitely one of the best places to visit in Spain!

This is a place full of tradition and history, so it gets thousands and thousands of visitors every year. It’s worth a visit just for cathedral, which is an amazing example of baroque architecture. If you like biking, you’ll enjoy renting a bike and cycling round the city exploring. There’s so much art to see, food to try and drinks to enjoy, you’ll be in heaven!

Toledo is right on top of a mountain top in the middle of Spain, which was actually the Spanish capital until the 16th century. This city is even sometimes referred to as “the city of 3 cultures” because Jews, Christians and Muslims all lived here together. It has a vast array of ancient art and architecture on show that you’ll be very impressed with if you like history. It dates all the way back to the Roman Empire!

Cordoba has plenty of medieval streets that will take you back in time. There’s also an amazing cathedral here (originally intended as a mosque) that still has a lot of it’s original architecture. Worth a visit!

San Sebastian is located in northern Spain just off the coast of the Bay of Biscay. It’s mainly a seaside city filled with great beaches for all the family, plus lot’s of places to try some traditional Spanish food.

Seville is full to the brim of tourist attractions, exciting festivals, and lively nightlife. Not only that, you’ll find some of the most beautiful and historic landmarks here. Christopher Columbus is even thought to be buried at the grand Cathedral of Seville!

Madrid is Spain’s capital – the largest city and definitely a must see. It has an absolutely electric nightlife that the party people among us will love, plus lots of diverse ethnic groups and cultures. One of Europes best cosmopolitan cities for sure!

All of these places in Spain are a MUST, however no matter where you decide to go it’s usually a long drive from Malaga airport, so be sure to pre-book a holiday taxi!

25 Tips On How To Plan A Cruise Trip

How to Make Sensible Decisions to Perfect Your Holiday Choice

All About Salò – A Scenic Area for Tourists (Italy)

10 Overlooked Places to Visit in the Northeast This Summer

6 Underrated Cities in the USA to Add to Your Bucket...

ABOUT US
ClickTravelTips provides travel editorials, tips, photos and guides from those who share travel as their passion. Find new destinations for your future vacations.
Contact us: [email protected]
FOLLOW US
© ClickTravelTips.com 2021
wpDiscuz